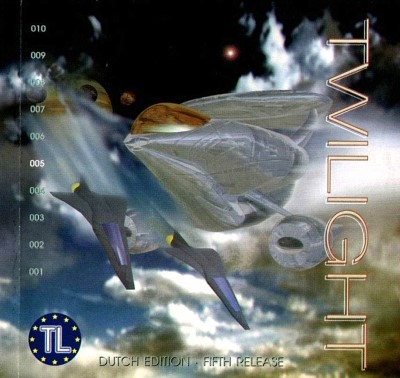 to the Fifth Release of

Finally, after a long and hot vacation, we’re here again with another
release of Twilight… We spent the last weeks of our vacation on this
release, so we hope you’ll enjoy it!

This time, we bring you the best of the entire summer, plus all the latest
in games and applications. A couple of long-awaited games were released
this summer, and of course it’s all here on Twilight.
Two of those long-awaited games are Quake and Formula 1 Grand Prix 2. The
wait is finally over, and it’s up to you to decide if it has been worth it!
But, whether you climb aboard a Formula 1 car or you decide to waste some
some monsters, you’re sure to enjoy yourself!

But, there’s more. Just take a look at the games and applications; Once
again, it’s a collection of the best what has been released recently.
Unfortunately, though, applications and especially games are getting
bigger and bigger, if not huge! It’s getting harder to fit a lot of programs
on a CD, so we’ve decided to release Twilight more often. Read the “Next
Release Of Twilight”-section for more information!

This time, you can find Windows NT 4.0 Workstation (full version) on the
CD. We put it on the CD in a compressed form; We decided to do this because
of the fact that, uncompressed, it would take up a huge 140 MB of the CD!
Since there are people who are NOT planning on installing NT, and since we
want to offer everybody a good release, we compressed it. Furthermore, if
you want to install NT you’ve got a decent machine (otherwise you might want
to think again if NT is the OS for you!), so you’re likely to have more than
enough free diskspace.

To be able to fit as many games on one CD, we have compressed nearly all
games; Most of them are already big enough! Fortunately, uncompressing these
games is extremely easy: Just use the Twilight Installer! With just a couple
of keypresses the game of your choice is uncompressed, and you’re ready to
go. For more information, read the section about the Installer later on!

As for applications, 95% is left uncompressed for easy installation.
Practically every application has its own setup/installation-utility, and
installation can be performed directly from CD. However, sometimes it’s
better to compress an application; But this is an exception and is done
with about 5% of all programs!

A beta-version of a game or application is a rare thing on Twilight.
However, sometimes we decide to put one on; We keep the following rules in
mind deciding whether to do so or not:

þ The program should have an extreme appeal to a lot of people,
i.e. newsgroups are already being created on the Internet;
þ It’s stable (we test it as accurate as possible);
þ The full version is scheduled for release sometime next century.

When compiling this CD, we came across a lot of files which were not
suitable for inclusion in the main list. However, we figured that these
files might be of interest to many people since these usually include
trainers, cracks, solves and docs. We selected the most interesting files
and put them together in the VARIOUS-directory of the CD. Please note
though, that we did NOT check any of these files!
A list of all files in the VARIOUS-directory with a short description can
be found in the file VARIOUS.LST, also in the VARIOUS-directory. You can
also view this file from the menu by selecting “View Various List”.

If you’ve installed the Plus Pack for Windows95, you might want to
take a look at the Desktop Themes we’ve gathered in the VARIOUSTHEMES-
directory on the CD.

The Twilight Installer enables you to easily select and unpack a program.
Some of its features are:

For more information about any of these features, or a simple guide on how
to use the program, take a look at the Online Help that comes with the
Installer. It can be accessed by pushing F1.

For fast and easy operation, it’s best to put the Installer’s files on
your harddisk. Also, if you want to use the Search-command to search across
all releases of Twilight, you must have installed the Installer to your
harddisk. To do this, we included a small installation-program. Just go
to the MENU-directory and type INSTALL. Since the files are very small,
this process will only take a few seconds.
To make sure the Installer is always able to find the required files, you
can set an Environment String called Twilight specifying the directory. So
if you installed the files to e.g. C:TWILIGHT, you should add a line like
this to your AUTOEXEC.BAT:

Putting the files on your harddisk also makes it possible to easily switch
from one release of Twilight to another, simply by pushing its number; It
doesn’t make a difference what release is currently in your CD-ROM drive.
Note: Older versions of the Twilight Installer are out-of-date and should
NOT be used anymore; Please re-install all files to your harddisk with every
new release of Twilight.

If you push Enter to install a program, the Installer will automatically
check if there’s enough free diskspace on the selected harddisk. Checking
will ONLY be performed if the game has to be unZIPped; Programs that have
to be installed using their custom installation-program quite often offer a
variety of different installation-options and perform free-space-checking
themselves. For those programs we give you an estimate of the amount of
diskspace a common installation of that program will take up.
If there’s not enough free diskspace to unZIP the program, unZIPping will
be cancelled. However, since the amount of diskspace stated as required is
an estimate which is correct for most machines, you might have enough free
diskspace while the Installer keeps saying you don’t. This problem is caused
by different block-sizes, i.e. especially short files take up more diskspace
on some partitions than on others. To override the Installer’s free-
diskspace-checking, push Control-Enter instead of Enter.

We included a small program called TL.EXE with nearly every program that
has to be unZIPped. It enables you to select common operations, such as
Setup or Run Game from a menu. Make your choice using the cursor-keys and
push Enter to select.
Also available is Read Documentation; We included a small doc-file with
many programs, giving you information on how to install, troubleshooting or
anything else that might be of importance. So make sure you take a look
at it!

We tested ALL programs on a couple of different systems with totally
different configurations (CPU, Memory, Network, Harddisk, OS, etc.). We have
found all programs to work perfectly, but it is possible that you run into
trouble. If you do, please read the Troubleshooting-section later on. There
are millions of different PCs out there…
Some people told us that they couldn’t get certain games to work. Once
again we say that all games work on our machines. So if a game doesn’t run,
first read DOCS&NFOTL.TXT to see if there are hints for installing and
running a program. Sometimes you have to disable QEMM, for example. If
the Troubleshooting-section didn’t help either, then it’s probably not our
fault but the programmers of the game’s problem!

We have performed virus-checking with the latest versions of:

We sincerely regret the fact that last time a harmless virus made it
through. Due to an unfortunate misunderstanding, a beta-version of release 4
was accepted for production; This beta-version contained the (once again,
harmless) virus, which had been removed on the version that was supposed to
be released.
The virus was found on Offensive and Lotus Word Pro 96 on the last release.
Use any virus-scanner to remove the virus from your hard-disk if it was
infected.
We have of course undertaken action to avoid situations such as these in
the future. It is now impossible for a virus to avoid our scanners, and make
it to the final version of the CD.

This section is intended as a trouble-shooting guide; It tries to give
you some advice if you cannot get a program to work.

þ Trying to run a program which requires 8 MB of memory when you’ve
only got 4 doesn’t make sense.
þ If you’re low on diskspace, try removing some files. Some
programs (especially under Windows!) require some free diskspace
to fiddle around with.
þ Try increasing the FILES= statement in your CONFIG.SYS.
þ Remove SMARTDrive. Please! 🙂
þ If you’re using Windows, put the Windows-directory in your path.
þ Try using many different startup-files (CONFIG.SYS/AUTOEXEC.BAT)!
Here are some suggestions:
þ Change memory-managers. Change QEMM to EMM386 and vice versa.
þ Use only HIMEM.SYS.
þ Try using no startup-files at all (clean boot). To do this,
push Left-Shift at bootup.
þ Remove all TSRs from your startup-files (or at least the ones
you don’t really need). Quite often they take up a big chunk
of vital memory, or they cause a conflict.
þ If a network is not required, disable it.
þ Remember to setup your soundcard properly! If you get it wrong,
it might just crash your machine. Many sound-setup programs offer
some sort of auto-detection; However, if this process crashes your
machine you have to set the parameters manually.
þ If the program doesn’t work under Windows, you’re in for a heck of
a time! 😉 Some causes of problems are:
þ Device conflicts;
þ Low on memory (try increasing the swapfile-size);
þ Missing DLLs or incomplete installations.
Also try tuning your .INI-files if you’re using Win3.X.

As stated before, we are going to release Twilight more often. Release 6
will arrive within 4 weeks, which is basically the time-period we’re aiming
at for every release to come. The number of weeks can of course vary, mostly
because of the fact that we can only release a new edition if enough software
is being released. We don’t fill up our releases with crap, of course.

As always, we thank our customers for their continuing support. As long
as you keep appreciating, we keep on producing!
Furthermore, we thank our programmer for creating his great tools,
including the new diagnostics-utility to nuke every virus from Twilight!

That’s it. See you soon on release 6!

We have included some Desktop Themes for Windows 95 in the VARIOUSTHEMES-
directory; Please note that you must have installed the Plus Pack to use
these, though. Read VARIOUSTHEMESTHEMES.LST for a list of all themes.
Furthermore, a bunch of Quake-related files has been gathered in the
VARIOUSQUAKE-directory. Ranging from a compiler to save-games, it’s
worth checking out for every Quake-player. Read VARIOUSQUAKEQUAKE.LST
for a list of all files.